Growth continues to be strong.  The median revenue of the companies on the list is $273mm and year over year growth is 29%.

EBITDA margin continues to be negative.  “On a median basis, the SEG SaaS Index has not been EBITDA positive since 2013, but has been steadily approaching positive territory in recent quarters.” 55% of the companies were unprofitable although 78% of the companies generate positive cash from operations thanks to the benefits of working capital.  “Select public companies posting negative EBITDA margin while generating positive CFO in 2Q18 include Box, Coupa, Nutanix, Proofpoint, Twilio, Workday, and Zendesk.”

Median revenue multiples are 7.6x revenue.  Also noteworthy, “37.8% of SaaS companies posted a revenue multiple of 9.0x or greater in the second quarter, making this the largest percentage of companies to do so since 2Q15. Select companies moving into the 9.0x + bucket in 2Q18 include 2U, AppFolio, Everbridge, HubSpot, New Relic, Paycom, Proofpoint, Talend, and Twilio.”

Growth drives the multiples. “Revenue multiples have long shown a very strong correlation to revenue growth, a trend that continued during 2Q18. Companies growing 40% or greater posted a median revenue multiple of 10.9x in 2Q18, a sharp increase over the same cohort last year (7.7x).  Conversely, companies failing to achieve greater than 10% revenue growth posted a median EV/Revenue multiple of 3.9x in 2Q18, approximately 50% below the Index median (7.6x).  Interestingly, SEG does not see a strong correlation between EBITDA margin and valuation. 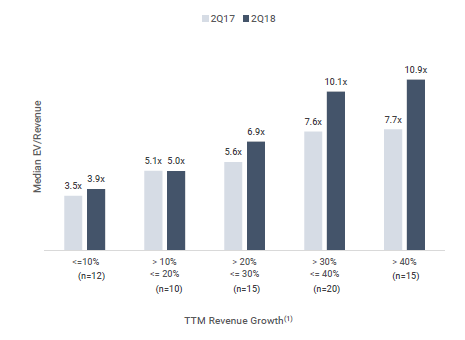 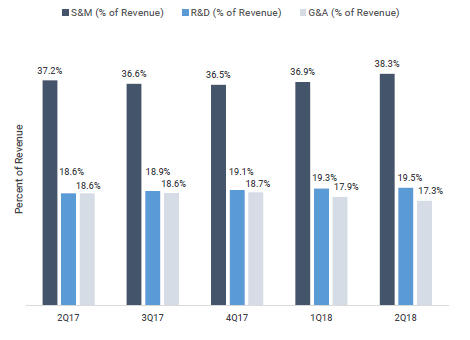 SEG’s report is thorough, frames multiples relative to two of the most important factors in any SaaS business (margin and growth), and shows that right now is a great time to raise money or sell as multiples continue to be high.