In order to make the chart more readable, we removed outliers of Alibaba, Facebook, Snap, Spotify, and Sabre which have raised $3bln on average whereas the group is at $159mm on median.  Even when we remove these companies which raised a lot more equity than peers, we still see a strong clustering to the left of the chart but the founders’ equity ownership is all over the place.  If there was a steady relationship between capital raised and founder ownership, we’d expect to see a clean trend of lower ownership the more equity raised (you’d be able to draw a clear downward sloping line from left to right). The raw data is below and includes the outliers that the chart excluded. 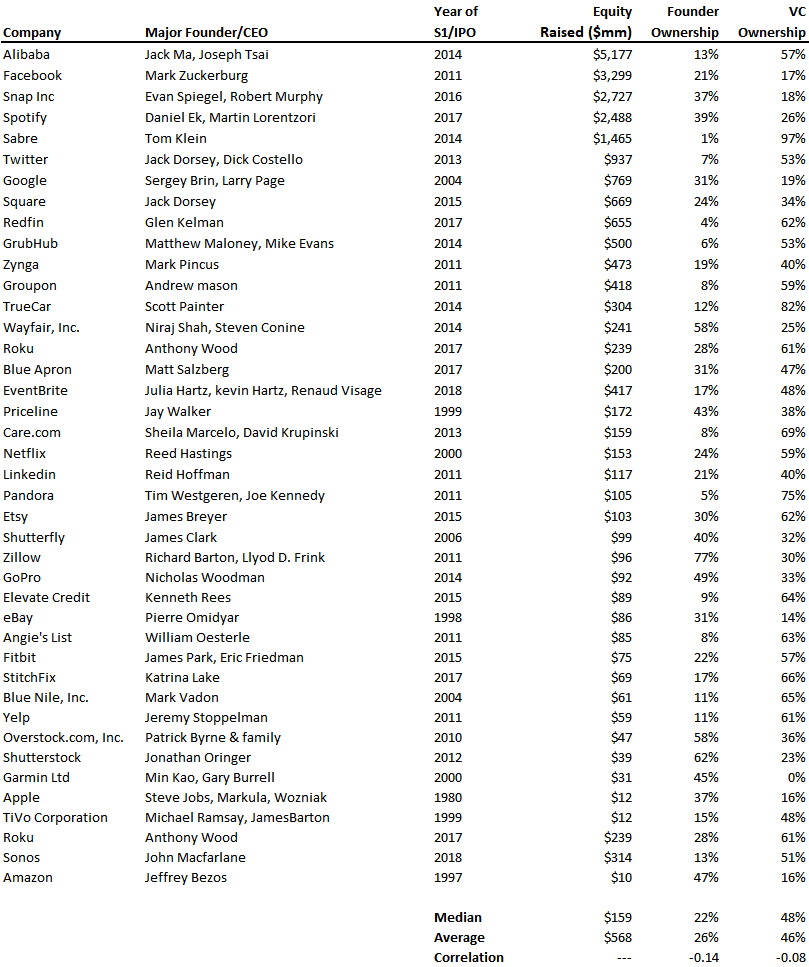 Taking the analysis a step further, we looked at the correlation between capital raised and founder equity, which came out to be only -0.14.  Recall that if the correlation was -1, it would mean definitively that the more equity raised, the lower founder ownership would be.  Alternatively a correlation of 0 would mean there is no relationship at all between capital raised and founder equity.  At -0.14, the relationship is weak at best, and nearly non-existent.

So how can there be no relationship between founder equity and capital raised? Does this mean you should raise as much money as possible? No.  Looking at the data in a silo is somewhat misleading: if you raise money, you’re getting diluted.  That’s a fact.  But, valuation matters so if you can raise at very high valuations, your equity is much more likely to be preserved whereas if you’re getting low valuations, large capital raises will eat materially into founder equity.

The data leads us to conclude that valuation is more important than capital raised when determining the impact of capital raises on founder ownership.