Recently I read “Once You’re Lucky, Twice You’re Good” by Sarah Lacy.  It’s a fantastic book about the re-emergence of Silicon Valley after the tech bubble in 2001.  The book is well worth a full read and I highly recommend it.  Below are snippets of the book we found most informative. 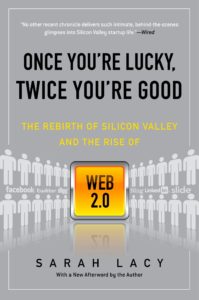 MySpace was sold too soon.  “It’s October 10, 2006.  Google had just bought Chad and Steve’s eleven-month-old video-sharing company YouTube for $1.65 billion.  The YouTube deal was an unwelcome confirmation: At $580 million, they’d definitely sold MySpace on the cheap a year earlier. MySpace was now one of the biggest sites on the Web.”

Yahoo almost bought Facebook for $1bln.  “By the end of the conversation, Zuck was at least open to exploring a sale, which was all Peter asked. Then a few days later, Yahoo!’s stock feel by 20 percent, and it tried to discount the deal. That was it. No sale.  Ultimately they were wise to hold out. Yahoo! had blown it, much like it blew the chance to buy Google for some $3 billion back before its IPO.”

Netscape started it all.  “Thirteen years ago Netscape – an eighteen-month-old company with no profits or business model to speak of – had debuted on the NASDAQ Stock Exchange and got the biggest first-day pop in stock price ever. It was the opening of the floodgates: In the next five years more than a thousand high-tech start-ups would go public, raising $66 billion.”

Digg proved the haters wrong.  “A few years earlier, tech news site CNET balked at adding “Digg This” buttons to the end of their stories. “We don’t do things like that,” they condescendingly told Kevin. By 2006, they were begging for buttons – along with the The New York Times, The Washington Post, and others.”

After the burst in 2000, Silicon Valley suffered.  “PayPal ranked among the very few tech companies to go public after the stock market collapse of 2000 and terrorist attacks of September 11, 2001.  Max Levchin could hardly go around a Valley in which one out of every three people were out of work and complain about all his good fortune.”

The right VC mantra.  “The Founders Fund. Its ethos grew out of his experience with venture capitalists and was rooted in giving founders better terms and getting out of their way.”

Marc Benioff’s advice.  “Later on when Josh agonized over whether to sell to Yahoo!, Marc urged him not to. “You should never sell as long as you are still growing,” he told him.”

Avoid the lure of venture capital.  “But Jay had seen the evils of too much money at Equinix. When start-ups have it, they spend it.  Sure, to really build out a big business, an entrepreneur would eventually need venture capital. But he could get pretty far on just a few million, and many could scrape that together from wealthy friends. By the time entrepreneurs really needed VC-level cash, their business would be far enough along that they could name the terms.”

Find a way to make your users love you.  “Revision3, and Digg are ostensibly about getting the entertainment and news that you want. But it’s the stroking of your ego that makes them so powerful. Having thousands of people read your opinion on something or your minute-by-minute life story. Having dozens of people mark your Yelp review as “funny” or “cool.” Your video clip becoming a YouTube phenomenon or your Digg submission getting voted front-page-worthy. People you don’t even know love you.”

Guerrilla marketing is the best.  “Why couldn’t they mobilize into a grassroots army to spread Firefox? It worked. Hundreds of thousands of bloggers added “Download Firefox” buttons to their sites, while thousands of others chipped in for a $250,000 two-page ad in The New York Times. A group of college students in Oregon made a 220-square-foot crop circle out of the Firefox logo. Even the logo itself was designed by a volunteer. As a result, Firefox grabbed 10 percent of worldwide browser market share in about a year.”

Skype’s marketing was nothing.   “By August 2003, Niklas sent some text messages to his friends telling them to check out Skype.com. They told their friends. That was the extent of the marketing. Within a month they had 1 million users.“

Listen to your customers.  “There’s no playbook for building a great community. It’s all about listening to the users and knowing when to give in to them and when to stand firm with your vision.  Consider Yelp. When Russ and Jeremy first started the site, they never thought people would write reviews. They thought people would use the site to ping their friends and ask them to recommend, say, a good dentist.  But then a funny thing happened: young women loved writing reviews and Yelp quickly reacted, redesigning the site so reviews were the dominant theme.  Cute funny girls in their late twenties and early thirties brought in lots of guys. Especially when Yelp started getting its community together for offline parties at hip clubs around the city, and all those girls showed up.”

Friendster’s demise.  “But then Friendster made two crucial missteps. The biggest was that the site couldn’t support the crush of traffic when it took off.   It didn’t act quickly enough to add more servers and update the site’s inner workings, so the Friendster loyal got frustrated and logged off.  The other mistake was trying too hard to control everything. Critics of Abrams say he was too rigid in what people could or couldn’t do on his site.”

Your users own your company.  “News Feed was undeniably a powerful and useful tool even for those who hated it. He didn’t do away with it, but he and his team coded all night to incorporate more tools to turn it off or control what it contained. Still, the company learned a valuable lesson: Facebook wasn’t just their company.”

Acquiesce to what your users want.  “Ultimately Kevin made the call: better to piss off corporate America than Digg’s community. He wrote a post saying, “After seeing hundreds of stories and reading thousands of comments, you’ve made it clear. You’d rather see Digg go down fighting than bow down to a bigger company. We hear you… If we lose, then what the hell, at least we died trying.” Kevin repeated the taboo string of letters and numbers in the subject line of his post – just to prove he was still the same badass, noncorporate Kevin after all.”

Being early can kill you.  “Just because those companies didn’t work at that time doesn’t mean successors won’t work now,” he says. “Just through the simple virtue of the fact time passed, a market developed.”

Startup life is a game for the young.  “Most of the fundamental breakthroughs in science, math, culture, music, or business came from people in their twenties. He can’t figure out why, but he has studied enough history to know there is some sort of correlation between young people and breakthroughs. …..“But you’re so young, you know little about what’s been done before. You’ve not bought into the assumptions that exist in any field. By the time you’re thirty-five, you start to have a really good understanding of the things that are possible to do and not possible to do. To have a fundamental breakthrough, you have to look at things so differently”

Fundraising needs to be fast.   “Word gets out that someone is pitching and suddenly he or she has to close the deal quickly or the company seems stale. This is similar to listing a house on a market; you want your deal to have the appearance of being the hot commodity everyone wants. “You smell shopped, and no wants to buy a shopped good,” Max says.”

Be 100% independent.  “A cardinal rule of start-ups is not to rely on any other business for their success, and widgets were 100 percent reliant on the sites like MySpace and Facebook that they ran on. These host sites could ban widgets or dictate how advertising could be worked into their products.”

Two types of companies.  “There are two kinds of start-ups in the Valley: those who create and evangelize a totally new type of technology, and those who see what someone else is doing and just do it better. Netscape was an example of the former, changing the way people used the Internet forever, but ultimately taking a drubbing in the browser wars at the hands of Microsoft. Google was an example of the latter, tackling search once everyone thought that AOL and Yahoo! owned it and executing search so much better that it won the market.”

Open platforms always win.  “Part of that is because Facebook has taken a different tack from MySpace: It wants other companies to take over its page, knowing that in the history of high tech, the most open platforms have always won.”

Success breeds competition.  “On paper, Kevin was worth at least $40 million. Of course, there’s a downside to the hype. Suddenly Digg had big competitors.  Kevin knew that Digg’s lead – and his own paper wealth – could evaporate at any time.”

Investors lost money, but companies survived.  “In reality, nearly half of the companies funded in 1999 – the peak – were still in business five years later.  If the failure rate for high-risk businesses was that low, perhaps not enough companies were started. The problem, he argues, wasn’t the number of businesses that were tried, nor was it the unproven business models. It was simply the huge amount of money that went into each one, money that was mostly wasted.”