Recently we spoke to Austin Eudaly, founder of Tom & Sheri’s Products, Inc. which produces a premium wrinkle releaser spray for clothing for consumers.  Founded in Dallas where the company also does the bottling, Tom & Sheri’s is off to a strong start. Austin shared with us his experience and insight in starting an ecommerce/CPG business.  Excerpts from our conversation are below. 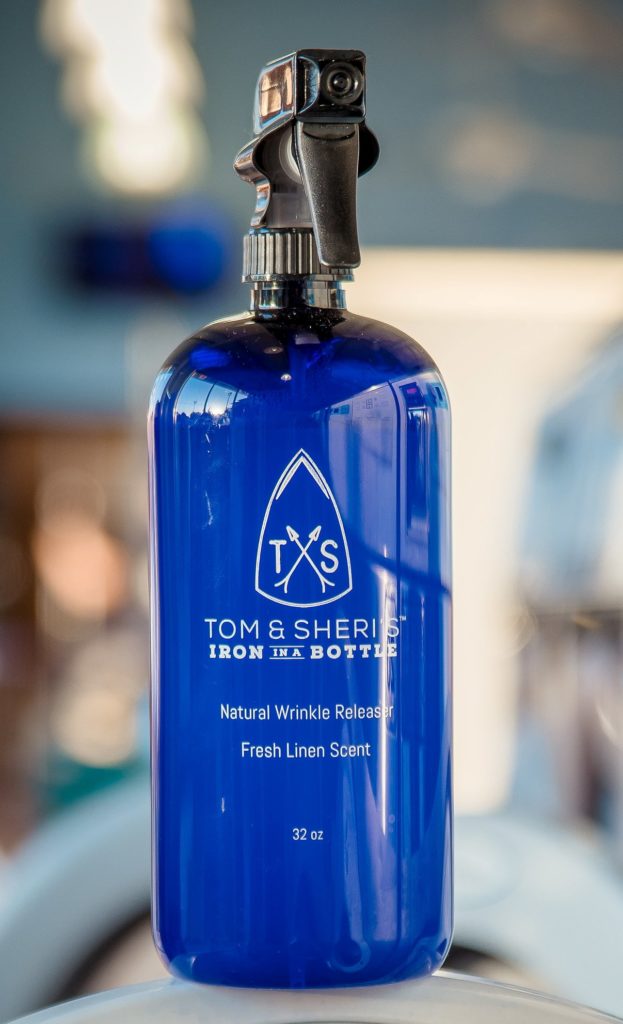 How did this business come to be? When Austin was heading off to college, his mom introduced him to a homemade wrinkle releaser spray.  “Years ago, my mom Sheri gave up on ironing and created a homemade wrinkle releaser spray. It was a game changer. No more irons, no more hassle and no more wrinkles.” After using the product himself, he abandoned ironing completely, but it took a trip to Croatia with some friends to realize the product might be a business. “I saw a need for this product when friends kept stealing mine, so I set out to perfect the formula.”

During 2017, Austin spent 7 months talking to chemists, researching different bottle shapes and sizes, and squeezed 30+ different spray bottle handles in order to come up with a complete product.  According to Austin, the goal was to “make a modern wrinkle releaser that was efficient, effective, and natural (bonus–it smells great too). After several trial runs, Tom & Sheri’s “Iron in a Bottle” became a reality. I named the company Tom & Sheri’s Products after my parents who’ve always been my inspiration and support.”

By April 2018, he had the formula perfected and officially launched the product June 1 ordering 3,000 bottles worth of formula and packaging from suppliers.  Sales and positive feedback from customers have been compelling. Enough so, he just ordered 40,000 more bottles last week.

What have you learned about selling online? Austin does not have a CPG or ecommerce background.  While prominent Dallas retailers Stanley Korshak and Culwell & Son agreed to sell the product in stores, ecommerce has been the primary driver of Tom & Sheri’s first 3,000 sales.

The greatest driver of those sales have been influencers.  “I’ve learned that influencers have power and they are very real.”  Austin realized how strong the influencer category was when a mom blogger named Shay Shull (Mix & Match Mama) posted about the wrinkle releaser – Tom & Sheri’s promptly sold 900 bottles that day.  According to Austin, “out of the company’s $50,000 in sales to date (generated over 2 months), 90% of that is from 2 key influencers that have blogged about the product.”

It’s forced Austin to take the influencer market seriously and delve into paid influencers. One issue is that paid influencers want to get paid up front with no real alignment or incentive for ongoing sales or total units sold.  Austin told us he’s “looking for longer term arrangements with influencers and more aligned compensation structures that give influencers a percentage of sales.”  Tom & Sheri’s also just started doing Facebook advertising which is yielding 2.5x marketing spend.  It’s still early, but effective.  The online store conversion rate is a whopping 10% (industry average is sub 2%) and over 2/3rds of online shoppers buy multiple bottles.

Who is the target market? Austin started developing the product with a focus on guys like him as a his core market – the company does have a PGA golfer named Bronson Burgoon that is a brand ambassador – but his experience with the mom-blogger influencer changed that perception.  According to Austin, “the average mother in her lifetime will iron enough clothes to go up and down the Empire State Building,” so while he believes the product is gender neutral, he has shifted some of his target market focus.  “For instance, we just ordered baby outfits that say ‘ironing makes me cry.’ We’ll give those to mothers that are also customers to dress their babies.”     Ideally, Tom & Sheri’s will partner with 30 to 50 influencers while also cultivating relationships with hotels, cruise lines, and other creative marketing partnerships.  According to Austin, “our goal is to continue selling online through influencers like Mix and Match Mama. We also want to be in additional fine retailers similar to those we are already in like Stanley Korshak and Culwell & Son.”  Longer term, mass retail is a focus: “we plan to to be in Central Market and Whole Foods. Hotel-wise, we are in talks with Four Seasons and other high end hotels to provide customers with a wrinkle solution other than traditional ironing:” 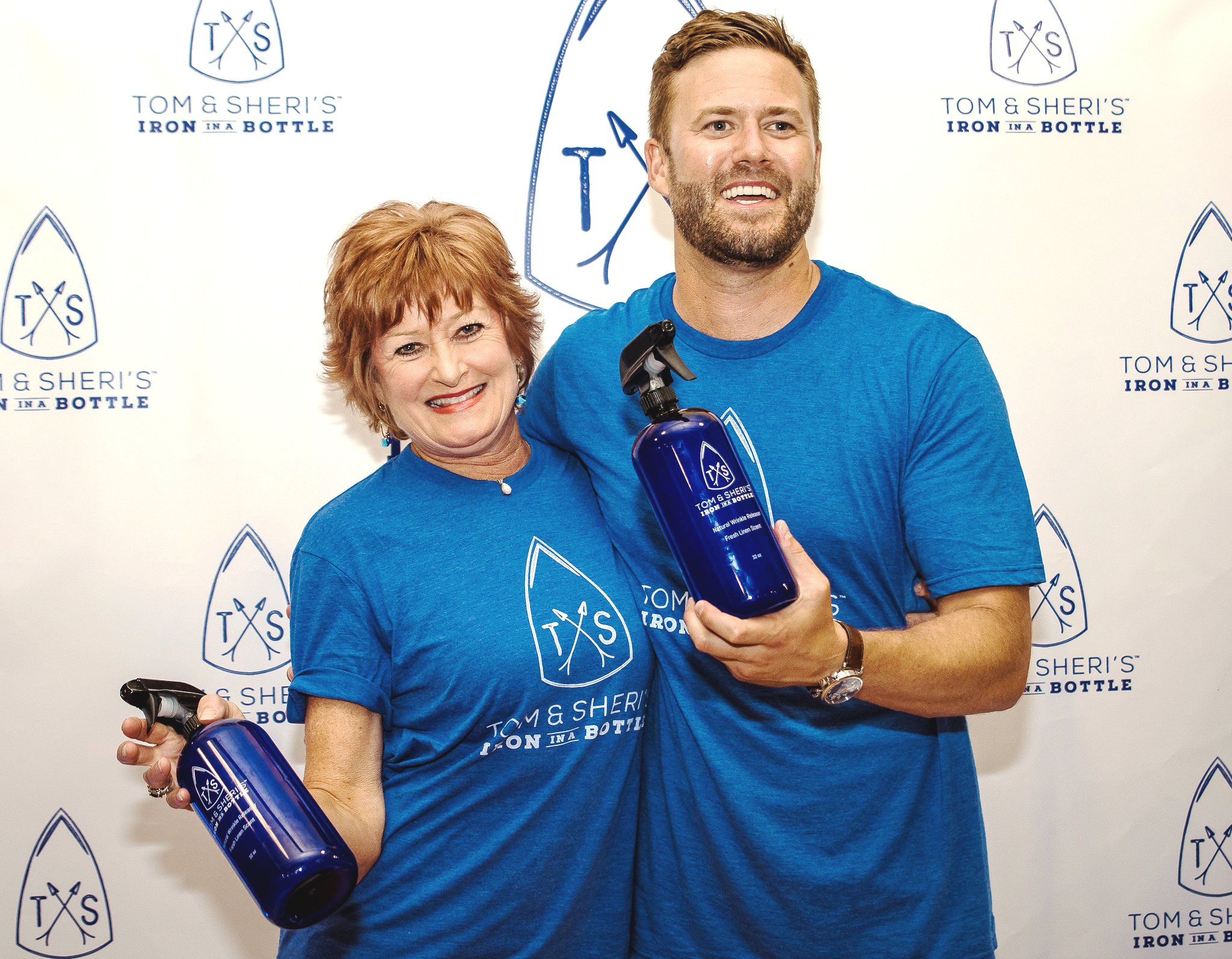 What other channels is Tom & Sheri’s selling through? The plan right now is to attack both the ecommerce channel and classic CPG channels in store at the same time.  Several boutiques have reached out asking if Tom & Sheri’s sells wholesale, so for now, the company is young enough to explore both avenues and gravitate towards what the customer is asking for.

According to Austin, “influencer pops are great, but selling through more consistent ecommerce channels and in stores is viewed as the longer term strategy.  Right now the product is carried by Stanley Korshak, Culwell & Son, All Good Things Paper (boutique in Dallas), Tin Lizzie’s (boutique  in Oklahoma City), and a few others.”

What have been the biggest challenges so far? Were you expecting these challenges when you first started? “Finding a chemist that would take the time to work with me was challenging, just getting someone to return my call.  The first thing they think is ‘who is this random guy from Dallas talking to me about wrinkled clothes?’” Even once Austin did speak to chemists, he had to make sure that person wasn’t locked into non-compete agreements or confidentiality agreements with larger CPG brands.

When Shay Shull blogged about the business on her blog Mix and Match Mama, the company was unprepared for the 900 orders that immediately came in.  “My head of operations Heather Wilson and I were up until 1am every night filling bottles and packaging to go out the next few days.  I thought we would sell 10 to 30 bottles total, but right now we’re at about 1,500 from that channel alone,” according to Austin.

What keeps you up at night? The company has received some great feedback, they’ve sold 3,000 bottles, but getting to the next level will require Austin to take some risk in the form of tying up capital with large orders.  “We want to work with other influencers and are in discussions to be on QVC, so I’ve got to have the product on hand to satisfy the demand.”  It takes 9 weeks from when the Tom & Sheri’s orders product to receive that product and customers won’t wait that long, so just-in-time ordering won’t work.  Austin is taking the plunge: “We just ordered 40k more bottles last week.” 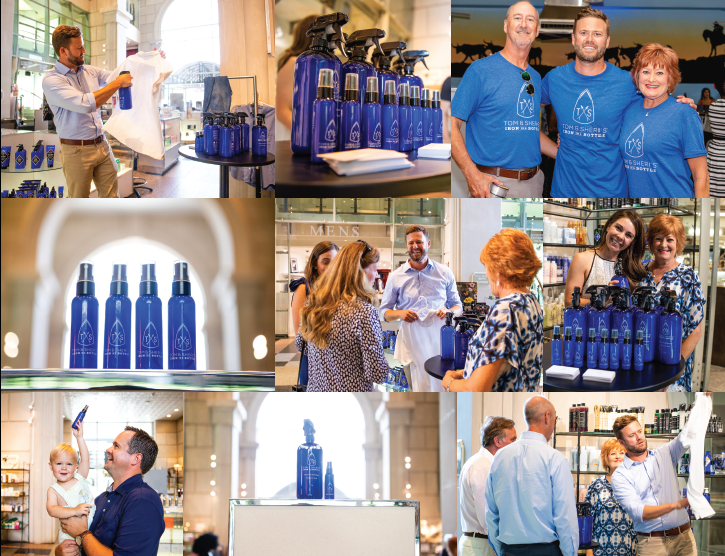 What have been some surprising learnings of your particular business? According to Austin, “some of the bottles actually exploded in the mail from a combination of intense heat and abuse by the post office.  We had to figure out how to solve that packaging problem and also take care of those upset customers really well.”  Packaging a spray bottle isn’t as straight forward as just putting a bottle in a box.

Tom & Sheri’s is off to a strong start, and we’ll continue to chronicle their progress in future posts.  Of course, you can pick a bottle at tomandsherisproducts.com.