We follow 60 publicly traded consumer tech companies in industries like social media, marketplaces, content distribution, gaming, ecommerce, payments, and new hardware.  Consumers and tech are a critical in the business model. Given the diversity of industries, the multiples vary.  Below is the data along with a few observations. 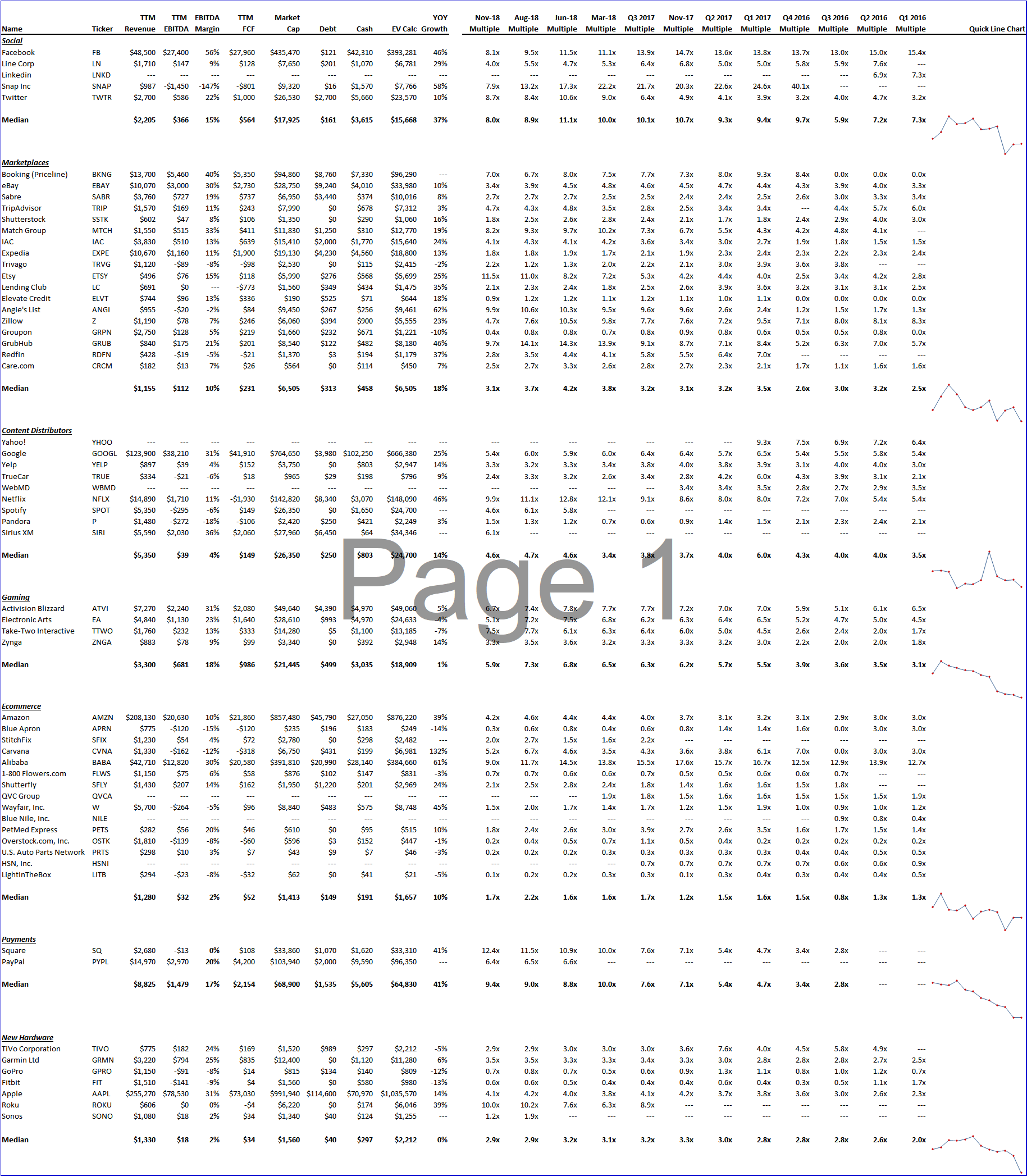 Social media has been sliding.  The median revenue multiple is now 8.0x.  While the revenue multiple is still quite strong, it’s down from 11.1x in June.   Snapchat has also taken a major dive falling from an average of 17.6x in the first half of the year to 7.9x today.

Marketplaces are also falling, down to 3.1x.  The revenue multiple for marketplaces fell to 3.1x.  The eighteen companies in this data set are diverse, but on median generate $1.1bln in revenue with 18% YOY growth and positive EBITDA ($112mm) and cash flow ($231mm).  Note the multiple is on net revenue, not GMV.

Content stayed strong.  Content distributors were showing weakness for the past year, but rebounded materially to 4.6x in June and 4.7x in August and 4.6x in the latest month (November).  Netflix’s revenue multiple continues to be the outperformer at 9.9x and Google’s revenue multiple is strong at 5.4x.  We also recently added Sirius/XM to the data set which trades at 6.1x. It’s the rest of the group which includes underperformers like Pandora that is suppressing the industry’s multiple overall, although Spotify is trading at a healthy 4.6x.   Google is obviously the behemoth in the space with $124bln of revenue over the past 12 months whereas the median of the group is $5.3bln.

Gaming isnt’ growing.  With all the hype around esports, the big public Gaming companies are not growing, with median YOY growth of only 1%.  Their median revenue multiple of 5.9x is strong but declined for the first time since we started measuring the data. It’s a bit perplexing to us as the sector’s YOY growth is only 1%, although median revenue is material at $3.3bln and EBITDA is very strong at $681mm.

Ecommerce hovers around 2x. The sector is the least attractive to investors, with a median revenue multiple of 1.7x.  There is a big difference between what we would call premium ecommerce like Alibaba and Amazon (9.0x and 4.2x), versus soft ecommerce like Blue Apron (0.3x revenue).

Payments trades at 9.4x.  We only have two companies to look at in payments so we try not to draw generalizations about the space.  We are glad to hear Stripe is considering an IPO so we’ll have another data point shortly.

Hardware is consistent.  ­Hardware is steady at 2.9x.  Roku is the standout of the group (10.2x) followed by Apple (4.1x).  The space isn’t growing but revenue is a solid $1.3bln on median with $18mm of EBITDA.  Sonos, the newest addition to the space is actually trading at a lower revenue multiple than the group at only 1.2x.