SaaS multiples look great and made a nice comeback from Q4 2018: of the 72 SaaS companies we follow, the average public SaaS business is trading at 10.51x revenue while the median is 8.94x.  Interestingly, the gap between the average and median has never been larger for the time period shown, meaning more attractive SaaS companies are being rewarded with big premiums.  The data is below. 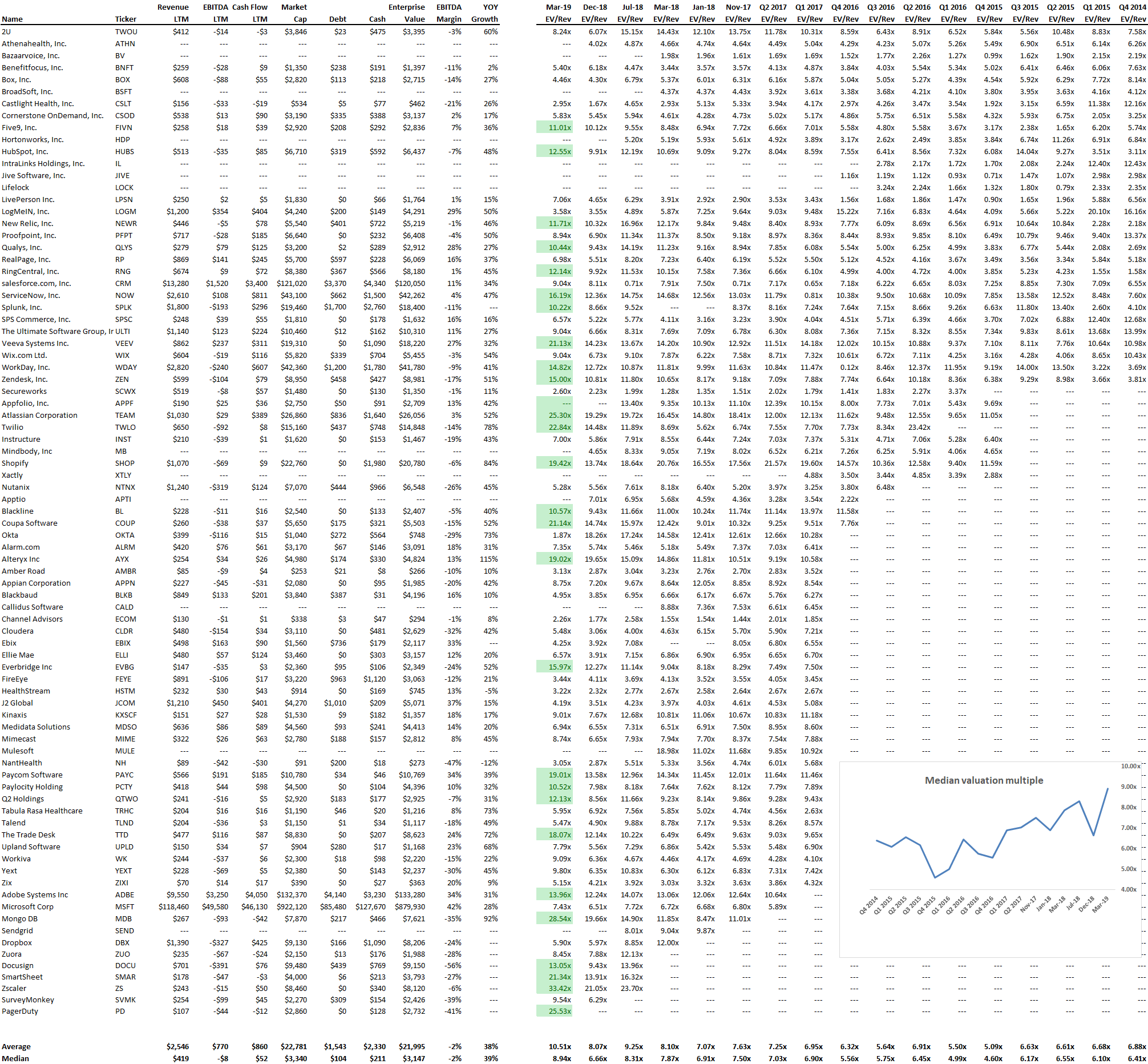 Negative EBITDA, positive cash flow.  The median SaaS business had trailing twelve month revenue of $419mm, EBITDA of -$-mm, but positive cash flow of $52mm thanks to deferred revenue and up-front collections on annual contracts.  Indeed so long as you’re growing (the median annual growth rate is a strong 39%), investors will overlook negative EBITDA especially if the business is cash flow positive after working capital changes.

The trend is still on.  The chart in the picture shows median revenue multiples we’ve collected since Q4 2014.  During that period, the median SaaS multiple has ranged from 4.60x to 9.32x with an average of 6.90x.

SaaS margins are still terrible.    Investors and founders love saying “SaaS margins are great.”  They’re not.  They’re horrible.  The median EBITDA margin for the companies above was -2% and the average was -2%.  Fixed costs for SaaS are terribly high and worse yet those fixed costs are mostly people, meaning the only way to materially cut costs is layoffs.   If you’ve ever fired someone, you know cutting costs by cutting people is not easy and hurts the culture and morale of remaining members.

Growth is strong.  The median of 39% is strong given the size of these companies ($419mm of median revenue).

SaaS businesses are healthy. There is almost no debt on these businesses as banks don’t like ‘asset-lite’ businesses like software. Additionally, these companies have $211mm of cash on the balance sheet on median, plenty relative to annual burn (recall EBITDA is -$8mm).  The number of years of cash on the balance sheet is less important given that these businesses are generally cash flow positive (median of $52mm), and indeed only 8 out of the 72 have negative cash flow.  Note that 38 out of the 72 have negative EBITDA, but again that’s acceptable so long as the growth is there and cash flow overall is positive.

Recent IPO’s are killing it.  Five of the latest SaaS IPO’s (Docusign, Smartsheet, Z-Scaler, Zuora PageDuty,) are trading at an average valuation of 23x revenue.  It shows that now is a great time to come to market whether you’re raising money or selling the business.  Survey Monkey, the latest company to IPO, is trading at a much lower 9.54x, but that’s in large part due to its nearly flat growth.

So what’s this data mean for a fast growing private SaaS business? Public multiples and trends guide what’s happening in the private markets: i) as compensation for illiquidity, size, and lack of profitability, prudent investors will look to invest in your private SaaS business somewhere below the median unless your growth rate is demonstrably higher than 39% YOY; ii) financing will continue to come from equity, less so from debt, although we’ve seen banks like Bridge Bank get more aggressive and lenders like Lighter Capital get more creative; iii) and burning cash is still acceptable on an EBITDA basis, so long as free cash flow is positive or moving in the right direction.