What valuations are founders asking for when they raise their Series A? Since May 2018, we’ve had conversations with 329 companies about their Series A rounds.  Below is aggregate data on these raises with names redacted to preserve confidentiality.  Figures like revenue, valuation, and round size are medians from conversations with founders.  Remember the valuations and revenue multiples presented aren’t necessarily what the founders got, but rather it’s what they asked for when talking to VC like us. 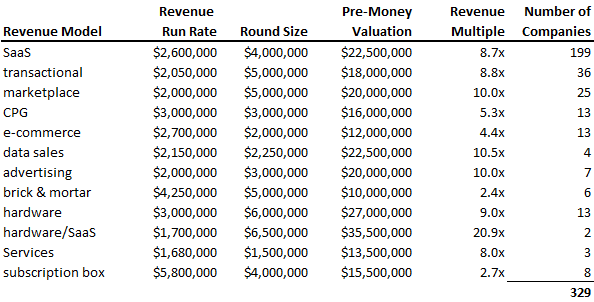 The data above was from May 2018 to present.  The data below shows the trend since we started publishing this data. 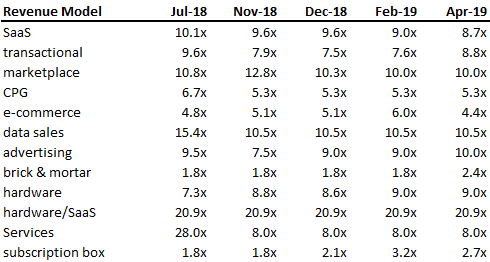 SaaS.  We’re generalists and tend to look at everything, but as you can see 199 of the companies we talked to were SaaS.  The median revenue run rate was $2.6mm, the median round was $4mm, and the median pre-money valuation the founder was asking was $22.5mm.  The result was a revenue multiple ask of 8.7x.

Transactional models.  The next largest category was “transactional”, whereby a company is selling a tech product but not as per a contracted, recurring contract.  We talked to 36 companies in the space, and surprisingly these businesses were asking for valuations that were 8.8x revenue even though the business model is not as attractive as SaaS.  We find that many companies that are currently transactional are trying hard to move to a SaaS model given the premium valuations  for contracted recurring revenue.

Marketplaces.  We talked to 25 marketplaces.  These are companies with 2 sets of customers and the company takes a cut of the transaction that occurs between the customers (similar to Airbnb, Uber, Lyft, etc).  The ask there was a median 10.0x revenue.

E-commerce. The last major category we evaluate frequently is e-commerce, which are those companies selling inventory to consumers online.  These businesses had median revenue of $2.7mm and were asking on median 4.4x revenue.